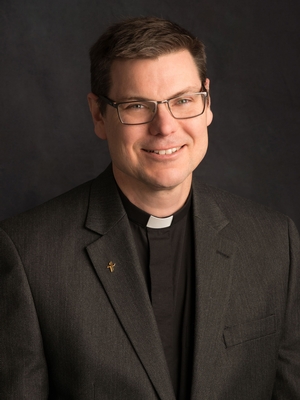 Pastor Peter Hoft grew up in Michigan, Illinois, and southern California. He received his Bachelor of Arts degree in Theology from Concordia University Wisconsin in 1996, and graduated from Concordia Seminary, St. Louis, in 2000 with the Master of Divinity degree. He was ordained into the Pastoral Ministry on July 2, 2000, at Good Shepherd Lutheran Church, Collinsville, IL, where he served as Associate Pastor until 2006. From 2006-2015 he has served as Associate Pastor at Park View Lutheran Church, Eldridge, IA and then was installed as Senior Pastor in January of 2015. He was united to his wife, Bethany, on December 27, 1997. They have been blessed with two children, Nathan and Gretchen. He enjoys spending time with his family and reading.

Joan Serrano was hired in the fall of 1985 as custodian while attending the adult membership class. She would occasionally work in the office while the secretary was out of the office. On October 1, 2000 she took over the office duties when her mother, Barb Colbert retired. Joan and her husband, Jerry, have three children: Jerry Jr., Chris, and Mindy. They have four grandchildren: Kylee, Analyn, Gabriella, and Sophia. In her free time, Joan enjoys bowling, reading, crossword puzzles, and spending time with her grandchildren.

Amanda joined Share and Care as a Teacher's Aide in the fall of 2018 and was recently promoted as director.  She and her husband have two children with the oldest attending Share and Care for three years.  Amanda has been an in-home daycare provider for the past 13 years.  As a family, they enjoy camping, attending tractor pulls and county fairs and spending time outdoors.  She also enjoys canning, gardening and raising chickens as well as a few other assorted farm animals.

Rhonda Upmeyer began as Lead Teacher at Share and Care Preschool in 2014. Previous to that   position, she was first a preschool mom when her boys attended here and then our Teacher's Aide since 2008. She has also been a substitute Teacher's Aide for the North Scott Schools and a classroom volunteer for Kindergarten through 6th grade at Alan Shepard Elementary since 2006. She received her Early Childhood Education certificate in 2014.  Her love for children, warm hugs and smiles make her well known by parents and children in the community.  Rhonda, her husband and boys enjoy many activities together including attending soccer games, band concerts and attending ISU events.  They also enjoy traveling to see family in Texas and weekend trips to Ames and Chicago.

Molly grew up in Ohio and graduated from Ohio State University.  She and her husband Ben moved to Eldridge in 2006.  They have two children who both loved their experience at Share and Care.  Atle is 10 years old.  He will be in 5th grade at Ed White Elementary.  Ben and Molly adopted him from South Africa when he was 2 years old.  Julia is 4 years old.  She will be entering her second year at Share and Care and can’t wait for it to start.  She has a great imagination and loves doing puzzles.
As a family they like to travel.  They often visit relatives in Ohio, North Carolina, and Pennsylvania.  If they aren’t playing games in the living room you can likely find them riding bikes or walking their little dog around Eldridge.  Molly enjoys cooking and baking and always has a little helper in the kitchen.

Mallory and her husband have two girls.  The oldest graduated Share and Care in the spring and the youngest one is starting preschool here in the fall.  She has had an in-home daycare for the last 10 years.  Mallory enjoys crafting, teaching classes at the library, and watching her children practice gymnastics.  As a family, they like to ride bikes and take walks.

The Share and Care team can’t wait to work with your child and help them learn and grow!